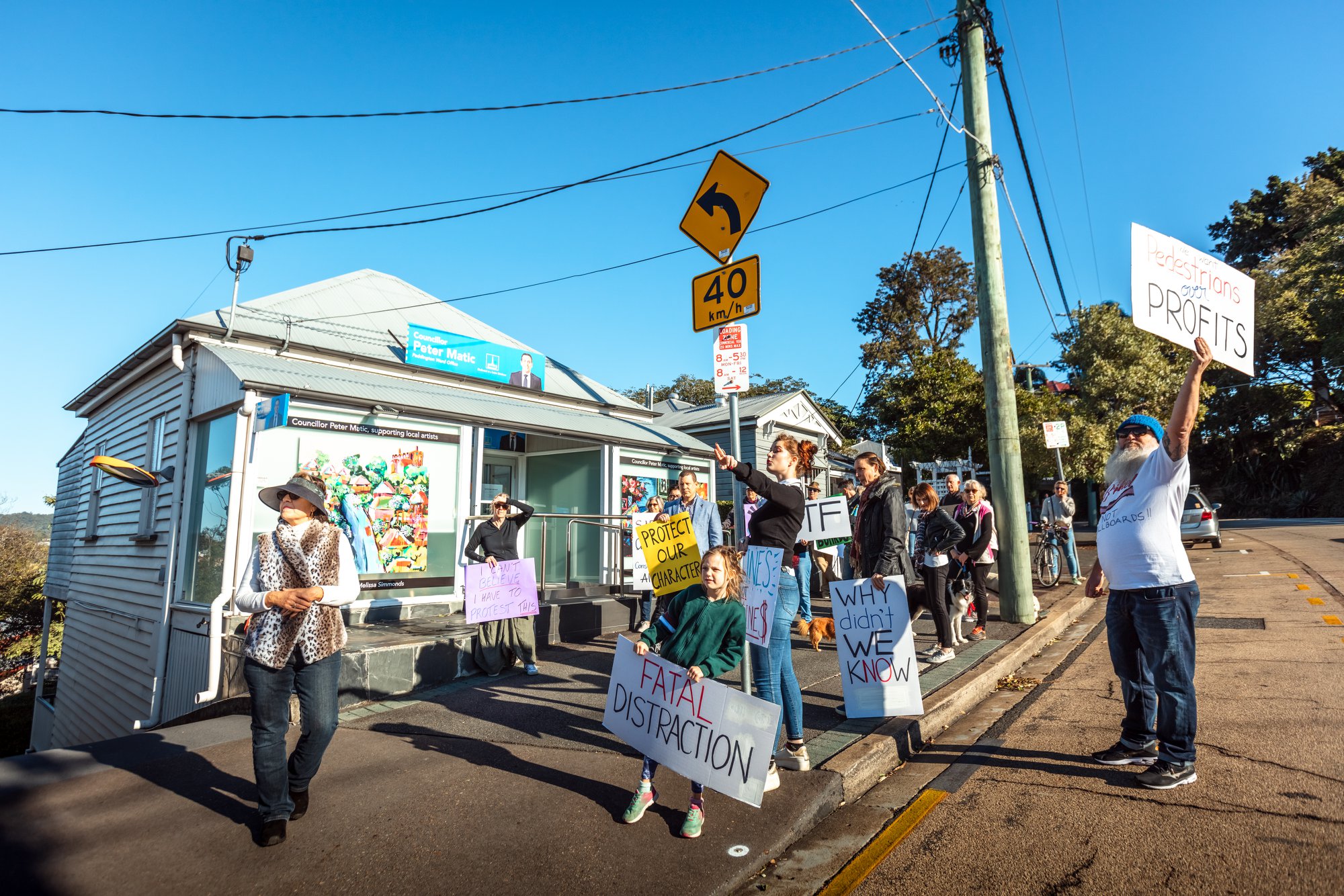 The snap protest against LED Billboards in Paddington was an immense display of community power; a heartening testimony to the strength of this people-powered, local campaign.

About 40 residents from Paddington and across Brisbane city attended with less than two days’ notice, bearing handmade signs and t-shirts. We called for an end to inappropriate, unpopular, potentially hazardous developments on our streets—

During the protest, two local residents shared their stories of being hit by cars; one on their bicycle, and one while walking. Putting a billboard at such a risk-prone intersection on Latrobe Terrace is purely irresponsible.

Our grassroots efforts pressured the withdrawal of a plan to build a second huge LED billboard on Given Terrace.

This is a significant win for our community to regain control over our streets and suburbs. It is absolutely imperative that we maintain this pressure. This fight isn’t over. The deeply unpopular and hazardous Latrobe Tce billboard remains. Loopholes in our planning laws allow further dodgy and inappropriate developments to be constructed without a shred of meaningful consultation or grounds for appeal.

This campaign has only just begun. Cr Matic has openly acknowledged that community consultation processes are inadequate for all private billboard developments. By that logic, the LED Billboard on Latrobe Terrace must be taken down—it should never have gained approval in the first place.

We are powerful, and our community is already effecting change. Our vocal opposition has already secured the withdrawal of the Given Terrace billboard, and a review of all electronic billboard approvals across the city.

One down, one to go. Let's ramp up the pressure, and enshrine changes to planning laws to protect and respect us.

- Neighbourhood Character: LED Billboards are entirely at odds with the aesthetic character of the inner-west and against the local planning scheme.

- Prohibitive for local businesses: the inner-west is the most expensive area in Brisbane for advertising.  They rarely promote local businesses, who are shut out by the inaccessible price. They're more likely to be used by big businesses, major party politicians, the gambling lobby, and other corporate industries that can afford the extortionate costs associated with renting the advertising space.

-No public consultation: Above all, one of the biggest concerns local residents have displayed is the fact that Council and State planning laws do not require any public consultation. There is also a concerning lack of transparency in that there is no publicly available information on past or current applications.

Under the City of Brisbane Act and the Local Government Act, the State Government specifically exempts advertising billboards from requiring assessment under ordinary planning scheme approval processes. Put simply, our local and state government planning laws are failing us. They are riddled with loopholes stacked in favour of developers—not the wishes or the safety of our communities.

Council’s refusal to address the gaps in the planning legislation since 2017:
Both State and Council laws are relevant to the billboard application and approval process within the Brisbane City Council. These are: